I wrote a small story of my experience on El camino de Santiago. I wrote it just because some friends asked to tell them the story, but it was an unexpected success and I decided to publish a small eBook. It’s been downloaded 14.000 times so far. 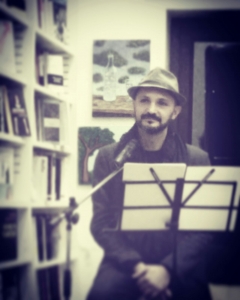 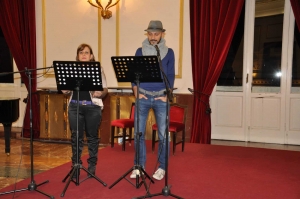 A long flight give you the time to fantasize and create imaginary worlds or eventually distort real events to make them a little more funny.

Yuri Chechi is an italian gymnast who won many olympic medals. One of them was particularly inspiring for me.

energy flows only through a connection

Arms fall, heads sink, all the limbs collapse as an android whose battery was disconnected. Silence, emptiness, the past and the future are gone. Inside the chest the heart maintains the inertia. Frantic persevere as he haven’t noticed that everything is over a moment ago. A tsunami of blood in a thousand conduits that leave the heart to reach the most remote ends. Hands and feet are no longer cold as they use to be, but they enjoy the warmth of the blood that bathes them, rewarding them for the work done. Every beat is an distinct explosion that is perceived clearly in that stillness, every beat is a shock wave passing through the stomach, calves and the tip of the nose. Drops follow the curves of the skin to find their way to rest on the sheets . They are far apart, each with its own beat, each with its own breathlessness, asynchronous from the other. The mouth breathing is fast, noisy, expressing aloud the energy that the heart continues to release inside. They are far apart, each committed to savor their sensations, as a connoisseur savors the wine keeping it in his mouth without swallowing. Each rewatching their own point of view. Touching it, licking it, harassing it. They are far apart, two distinct elements, divided on the canvas of the beige crumpled sheet. The two naked bodies are far apart, ruffled and lascivious. Head and feet to form an outrageous Yin and Yang. Two fingers stretch to break that geometry. The arm follows tired. They look for the other side to create a connection. To rebuild a link without which the engine wouldn’t be set in motion. Just a thin wire to slide the energy and operate an engine, as well as just the touch of two fingers on the naked skin of the hip restores the flow and give completeness to the one.

Right after the Trump election, I was frustrated, sad and...

Don’t let him do it. Don’t let him subdue you. Xenophobia, racism, and all types of discrimination must stay out of our culture. We’ve already put them in the bad column. History has taught us discrimination of any kind degrades a society’s tissue until it crumbles apart.

Don’t let this man begin a de-evolution process in the American society. Don’t let this man open the cages where we have locked our worst human instincts, because that is what happens when you let a man like him freely set the agenda.

You have to fight back.

You have to firmly stand on your principles when the wind of wickedness stirs up and moves across the land.

He will be flanked by those who are too small to house some humanity. They’ll gain confidence. He’ll pit us against one another like in a war, because war is his way of solving disputes. You will be tempted to drop your ideas and surrender because there are too many opponents to fight.

Don’t. Just don’t. Defend the principles your ancestors fought to give you.

I know this will happen because it has already taken place in my country; when a similar man, whose only friends were banknotes, was put in office. Italy isn’t the same anymore. You can see the ghosts of selfishness flying among us like never before. You cannot feel the warmth of the sense of justice our grandparents had built in the decades before. Lack of motivation and lack of perspectives are depressing the soul of what once was a smiling country. Our smiles are fading like a flower.